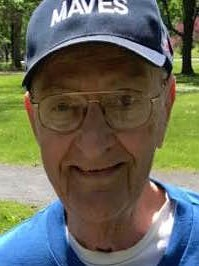 John "Jack" Church, 86, of Marcellus, passed away Sunday, November 17, 2019 of heart failure, at the Iroquois Nursing Home, in Jamesville, NY. Jack was born in Rhode Island in 1933 to Herbert and Vivian Church. He graduated from Aldrich High School in Warwick, RI and attended the University of Rhode Island.

Jack's community service started in August 1951 when he joined the Naval Reserves, Submarine Unit in Providence, RI. He was drafted into the Navy in 1955 at the end of the Korean War and served aboard the USS Sablefish based out of New London, Connecticut. Jack received an Honorable Discharge from the Navy and returned to his Reserve Unit until he was hired by the Amica Insurance Company.

Jack was then sent to Amica's Boston office where he met the love of his life, Elsa Basilici. They were married ten months later and were transferred to the Syracuse, NY office where they began their family in Marcellus, NY.

Jack was very active in the Marcellus community, joining the Optimist Club in 1968 and was treasurer for seven years and sat on the board of directors for 12 years. He co-chaired the Saturday Bowling League at Marcellus Lanes for 10 years. Jack was also involved with the Optimist Little League program for many years. He was awarded "Optimist of the Year" three times and was honored in 2005 by the Marcellus Rotary Club with the Vocational Service Award. Jack was a member of the Marcellus American Legion Ralph Share Post 297.

After retirement, Jack joined the Marcellus Fire Department. He first became an EMT and then drove ambulance. He was their treasurer for five years and sat on the Board of Directors for eight years. Jack also was one of four people who received the Life Saving Award from Onondaga County. He received the Marcellus Fire Department EMS Award in 1992 and the County EMS Award in 2000.

Even with all his community work, Jack was an exceptional father who always made time for his family. He was predeceased by his parents, granddaughter Sarah and his wife Elsa Church.

Calling hours will be 4 to 7pm, with an American Legion service at 7pm, both held Wednesday, November 20th at Ryan Funeral Home, 44 E. Main Street, Marcellus. Burial will be private.