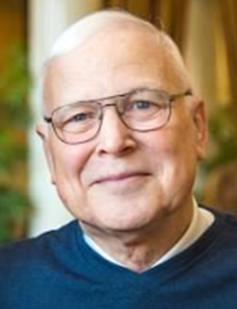 James W. “Duke” Hotaling, 74, of Marcellus and formerly of Liverpool, passed away peacefully at the VA Medical Center in Syracuse, NY after a brief illness with two of his three children by his side.  Jim, a U.S. Navy Veteran and retired Niagara Mohawk Nuclear Engineer, dedicated his entire adult life to his family, raising his children: Greg, Stephanie, and Meghan in Upstate NY, and cheering them on in each and every life adventure.  His love and support of his children was only ever matched by his adoration of his four grandchildren Tabor, Tim, Matt, and Abby.

Jim is remembered by his friends and family by his smile, his laugh, his kindness, and his heart.  As a father, he was our loudest cheerleader. As a neighbor, he was the first to lend a hand. Jim was proud of his faith, his country, and his family. When he reached the end of his life, he wanted to transition with the same pride and dignity that he lived with and he did just that.

Jim was predeceased by his parents George and Edith Hotaling, his brother Bill Hotaling, and his sister and brother-in-law Hazel and Fred Kirkowski as well as Gail Hotaling, mother of Greg, Steph, and Meghan.  Jim leaves his children and his son-in-law Dan Finn, his grandchildren, his brother Hank Hotaling, sister Edith Zeh and sister Bonnie Mosier.

Calling hours will be from 4 to 6pm on Friday, November 9th, 2018 at Ryan Funeral Home, 44 E. Main Street, Marcellus, with a memorial service and U.S. Navy Honors to follow at 6pm, also held at the funeral home.  Interment will be scheduled at a later date in Voorheesville, NY, Jim’s hometown.

In lieu of flowers please consider donating to the American Society for the Prevention of Cruelty to Animals (ASPCA).

Share Your Memory of
James
Upload Your Memory View All Memories
Be the first to upload a memory!
Share A Memory
Send Flowers
Plant a Tree